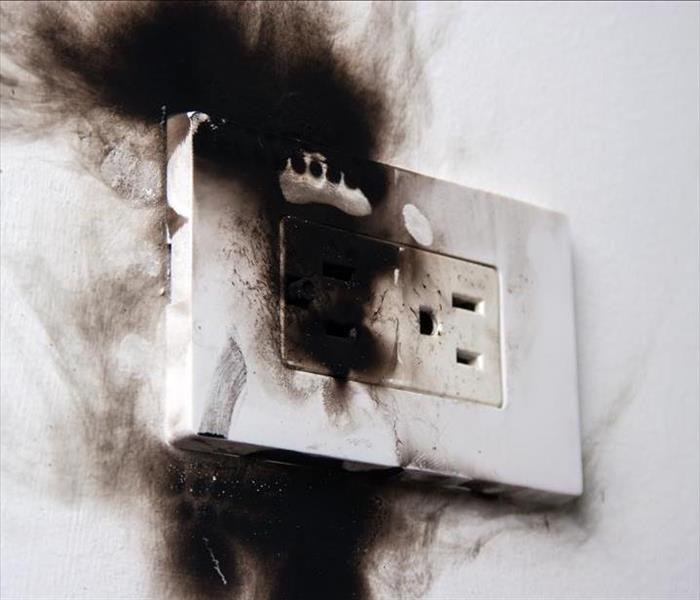 Let the professionals at SERVPRO of Eagle Rock take care of your Glendale electrical fire!

Fire damage in Glendale can occur in a moment's notice resulting in substantial property damage and loss. Determining the extent of damage is critical to predicting the outcome of the fire clean up and restoration attempt. Identifying the source of the fire is necessary to understand what conditions were favorable to ignite the fire. Although there are numerous causes of an electrical fire, one of the most commonly overlooked causes is overloaded electrical receptacles.

It is important to recognize the warning signs of a potential electrical fire in the Glendale home. If the electrical outlets appear to be emitting what feels like heat, this is a sign of a probably overloaded circuit. Anytime the outlets feel hot to the touch; the outlet is more than likely overloaded. Anytime that you smell a burning smell from the outlet, immediately unplug power cords from it and do not use it. The electrical wiring is situated behind outlet boxes in the wall, and the wiring runs behind walls. There is a significant chance that an electrical fire can lead to a house fire for these reasons.

A related concern that may predisposition the home to an electrical fire is observing flickering lights or noticing that the lights appear to be dimmer than usual. This is a problem because homeowners may confuse this with a light bulb getting ready to burn out. While this also resembles the signs that a light bulb may be reaching its maximum capacity, it is important to monitor this to ensure electrical safety. Homeowners should never make assumptions when it comes to electrical safety and the safety of those who reside within the home.

The possibilities of an electrical fire are serious concerns that must be dealt with in an urgent matter. In the event of an electrical fire, contact our team of professionals at SERVPRO of Eagle Rock at (818) 244-6005. Our team will bring their wealth of knowledge, experience, and leadership to your home.